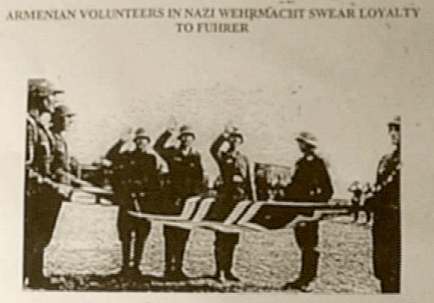 In his Irish Times (20/2/16) book review of ‘Justifying Genocide: Germany and the Armenians from Bismarck to Hitler’ by Stefan Ihrig,  Lawrence Douglas states:

“Ihrig brilliantly lays bare the ‘confluence’ between German anti-Semitic and anti-Armenian stereotypes. Jews and Armenians were treated as ‘Semitic cousins’, with the latter playing the role of ‘quasi-‘ or even ‘über-Jews’.”

The Nazi extermination of the Jews is the ultimate analogy drawn to demonise Ottoman Turkey in relation to the Armenians. The comparison is historically absurd and no historian worthy of the name would make such an analogy. But academia these days is heavily populated by those who substitute feeling and effect for truth and fact. So we are forced to ask the question: were the Armenians really what Stefan Ihrig calls ‘über-Jews’ in Nazi Germany?

Luckily we have a book by an Armenian about a very famous Armenian freedom fighter which helps us answer the question. The book in question is “‘Dro’ Drastamat Kanayan: Armenia’s First Defence Minister of the Modern Era” by Antranig Chalabian. Not only does it reveal that Ihrig’s “brilliant” work is utter nonsense but it also highlights the one actual and irrefutable link between the Armenians and Nazi Germany – and it is not Turkish. The book is published by the Indo-European Publishing House of Los Angeles (the significance of whose name will become apparent).

I first came across ‘Dro’ when writing a book ‘The Armenian Insurrection and the Great War’ which includes reprints of the celebrated Insurrectionary, Garegin Pasdermadjian’s writings in which ‘Dro’ features both in text as well as pictured, at the start of the Insurrection of 1914. Along with the famous General Andranik, ‘Armen Garo’ (Dr. Pasdermadjian) and ‘Dro’ were the most famous Armenian guerrilla leaders. I introduced ‘Dro’ with the initial  information I had learnt about him:

“Another character prominently featured in Pasdermadjian’s 1918 book, was General ‘Dro’ or Drastamat Kanajian. ‘Dro’ (who is pictured with Pasdermadjian on the book cover) went on to head the Armenian Nazi Legion of 22,000 in World War 2, with a large complement of SS in tow. ‘Dro’ apparently put his special skills of massacre learnt in the Armenian Insurrection at the Fuhrer’s disposal, whom he met on a number of occasions. It is said Hitler consulted him on a number of occasions and his nickname was ‘the Jew hunter’. When World War II ended the surviving Nazi Armenian soldiers along with their commander were admitted to the U.S, despite being wanted by the Russians for mass murder. ‘Dro’ lived out the rest of his life there, before dying in Massachusetts in 1956. His body was returned to the Soviet Republic of Armenia and he was given a State funeral.”

The bulk of this character sketch is confirmed in the Armenian biography of ‘Dro’. And there is much more.

“World War II changed the course of Dro’s life regardless of his will or intention, linking him to the Russian-German struggle as ‘a collaborator with Nazism’… It is not possible to accuse Dro of sympathising with the Nazi ideology… He was guided solely by the supreme interests of the Armenia and the Armenian nation.” (‘Dro’ Drastamat Kanayan: Armenia’s First Defence Minister of the Modern Era.p. 219)

‘Dro’ went round the German Prisoner of War camps and recruited the captured Armenians who had been drafted into the Red Army  into the Nazi Armenian Legion.  The Armenian 812th Battalion was created in December 1941 growing from 8,000 to 20,000 men. Christopher Walker argues that Dro’s intention was that the Nazi forces should fight for Hitler, culminating in an entrance into Yerevan to finally deal with the Turks.

Chalabian notes that the Armenian National Council published Nazi propaganda from a weekly newspaper, ‘Armenien’ and a radio station in Berlin from 1942. ‘Dro’s’ biographer asks:

Dro’s collaboration is a difficult issue for Armenians and it is a tricky job to write a sympathetic biography of the national hero without attempting to excuse his actions. The Armenian Revolutionary Federation (Dashnaks) considered establishing a distance from Dro from his Nazi collaboration but decided against it. Chalabian indeed notes that the Nazi collaborators from Armenia, the Ukraine, and Byelorussia would have been many more “… if Hitler had behaved a little differently… they could have shaken the anti-populist regime of the Kremlin’s dictator and his sycophants from its foundations… They hoped to advance side by side with the Wehrmacht… Toward Moscow, and to topple Stalin’s hated regime.” (p.222)

The Armenian recruits did not just come from captured Red Army soldiers of the Yerevan Republic but also from the large Armenian communities in the Balkans and Ukraine.

Dro and his Dashnak comrades went to Berlin for discussions with the Nazi high command as the invasion of Russia got underway. Chalabian notes:

“They were impressed with everything in the city; law and order was notable everywhere. Berlin was peaceful and life was as if normal.” (P. 243)

From there Dro was taken to Warsaw and then the Crimea. Dro visited the POW camps recruiting Armenians for the German army there. Whilst in the Crimea he witnessed the disposal of the bodies of hundreds of Jews in trenches the SS had had dug by locals. Although “people were not allowed to go anywhere near these trenches” Dro’s group was treaty specially by the Nazis and permitted access, according to Chalabian. (p.245)

However, Hitler never reached Yerevan to deal with the Turks and Dro fled west as the Red Army closed in on Berlin. He was captured in Heidelberg by the Americans. At first the Americans decided to send him back to the Soviets as a collaborator but then “they sent him to Mannheim, to a retention centre for high-ranking German commanders who were not considered Nazis. The retention centre was a former palace/estate, and the accomodation was very comfortable.” (P. 254) US Intelligence had use for him it seems.

It is most probably true that Dro was never an ideological Nazi. However, Armenians did work with the Nazis and attempt to secure a place for the Armenians in the new Hitlerite racial order. According to Simon Vratsian (Along Life’s Pathways), an influential wing of the Nazi Party wanted to classify Armenians as not “Indo-European”, but “listed among the Asiatic peoples, which meant a race unworthy of living. Dro and his comrades were able to recognise the danger… They put forth proofs that Armenians are of Indo-European origin and belong to the Arian race.” (p.224)

Apparently Armenian/Nazi connections had begun a generation before the Final Solution. The German-Armenian Union, formed in 1914, and predating the Nazis, included Artashes Abeghian, Professor of Eastern Studies at the University of Berlin who “conducted propaganda about the Aryan origin of the Armenians.” It was these people, including German academics, who later contacted Dro and decided to collaborate with the Reich from 1940, according to Chalabian (p.232). The German-Armenian Union “was formed by Johannes Lepsius” who is often cited as a “good German” speaking out against Ottoman treatment of the Armenians.

Chalabian also reveals that Dr Paul Rohrbach and Artashes Abeghian published a book in 1934 called ‘Armenian-Aryan’ in collaboration with Nazi intellectuals which “strove to prove that Armenians belong to the Aryan race and the Armenian language to the Indo-European family of languages.” (p.234) The year before, in 1933, “Goebbels had formally declared that the Armenians were Aryan.” (p.248)

These pieces of information revealed by Chalabian were probably only the tip of the iceberg. The author would have no interest in publicising any more details that he had found out about Armenian/Nazi links in his Armenian sources and it is surprising he revealed even these.

To return to the point of this article: How can it be asserted by Stefan Inrig and Lawrence Douglas that the Armenians represented “the role of ‘quasi-‘ or even ‘über-Jews’” in Nazi Germany when Dro and his Legion were welcomed into the ranks of the Third Reich and aspired to be and were accepted as a good racial type by prominent Nazi intellectuals. Could we imagine a Nazi Jewish Legion being accepted by Hitler or the Jews pressing for high racial status and being spoken for by Goebbels?

So what is all this nonsense about the Armenians being ‘über-Jews’? What idiots could write such rubbish if they had bothered to read anything beyond their ideological horizons.

Let us be fairer to the Armenians than Inrig and Douglas are to the Turks. Let us accept that the Armenians who collaborated with Hitler did so from the motivation of self-preservation rather than any ideological affinity with the Nazi philosophy. Let us leave aside the fact that this would have strengthened the Nazi war machine and have fatal consequences for the many minorities that the Nazis chose to exterminate and make them accessories to Genocide through such collaboration. Let us accept Chalabian’s argument that Dro and the Armenian Legion did such things because of their love for one section of humanity over all others and their desire to preserve their people/race, even if it meant legitimising the Nazi racial policy by acquiescence to it and engagement with it.

Let us, however, also take on board the understandings of another Armenian writer, Dr. Manuel Sarkisyanz, given as lectures in Heidelburg University to its South Asia Institute. In these lectures Dr. Sarkisyanz explains that Nazism did not come out of a vacuum. It indeed had substantial ideological forebears in its ant-semitism, expansionism and its Genocide and the practices to demonstrate such statecraft. And no where in the Armenian’s lectures do we read mention of the Ottomans as his inspiration for the Nazi regime. Manuel Sarkisyanz’s lectures have been published in book form by Athol Books. It is called ‘Hitler’s English Inspirers’.