Depart… and let us have done with you! 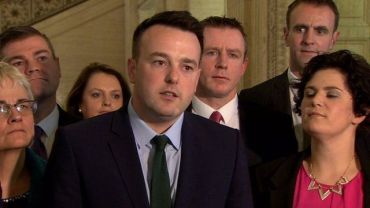 Cromwell famously said to the Long Parliament when he thought it was no longer fit to conduct the affairs of the nation: “You have sat too long here for any good you have been doing. Depart, I say, and let us have done with you. In the name of God, go!”

Leopold Amery repeated the same words to Neville Chamberlain in Westminster in May 1940, after the British expedition had met disaster in Norway. And they could be repeated again as the Ulster Unionist Party, the SDLP and Alliance Party of Northern Ireland depart the Executive for an illusory Opposition.


Having failed to flourish in the Paradise of its own making – or that of its leader John Hume – the SDLP, having flirted for years with unravelling its own creation for the construction of an Opposition at Stormont, has finally gone and done it. In other words with the leader of the party that governed Stormont for 50 years it has conspired in the creation of something that in large part began ‘The Troubles’ in the first place. And perhaps it is fitting that Eamon McCann is back to see it!

In the Parliamentary system it is essential that an Opposition can be an alternative Government, but that runs counter to the essence of the GFA, which empowers all parties according to their elected representation. In fact, the very first person who ever suggested such a thing was the SDLP’s former leader, John Hume, back in 1970, who told the Irish Government that he preferred:

“… a continuance of a Stormont parliament but with a completely new form of administration which would necessarily include representatives of the Opposition… He has not worked out this idea and has nothing specific to put forward but his thinking runs along the lines of a continuance of a representative Stormont Parliament but with something in the nature of a board of management drawn from the best talent in the House rather than a Party Government…” (NAI, DFA 2000/6/660).

That was the germ that became the governmental structures of 1998. And now the SDLP has undone all the work of its leader.

The Opposition illusion has been doing the rounds ever since the SDLP and UUP botched the first Executive and were rejected by the people of both communities. The Unionist Leader who succeeded David Trimble, Sir Reg Empey, suggested what amounted to a kind of losers’ Executive to circumvent the declining election results of the UUP and SDLP. He called for the scrapping of the d’Hondt system, which distributes Ministries according party strength in the Assembly. He said that “there was a role for a ‘real opposition’ like that seen in the US and other democracies” (IN 9.8.07).

It was increasingly argued in the ‘moderate’ media that the SDLP should join forces with the UUP and thus constitute an Opposition within Stormont through which a ‘normal’ political system might develop. In March 2013 Brid Rogers, the former SDLP Agricultural Minister, called on the SDLP to give up its one remaining Ministry in the Executive and take up the position of Opposition in the Stormont parliament (IN 9.3.13). Margaret Ritchie and Dolores Kelly repeated this call at the SDLP Conference in November 2013.

Patrick Murphy in an Irish News column entitled ‘Stormont’s d’Hondt set-up haunts SDLP’ put forward the fullest case for Opposition and undermined that case in the same breath in an interesting series of thoughts:

“The theory supporting power sharing is that democratic elections can never remove a Unionist government in a state designed to have an inbuilt Unionist majority… So power-sharing is seen as our best option. Here’s a thought how worse off would we be if Stormont had been run by the Unionist majority for the past six years?… Why are there no non-sectarian parties to argue the case? Perhaps that has to do with the institutionalised communal bloc system that the SDLP insisted on in 1998? Perhaps it is to do with SDLP opposition to non-sectarian politics in the form of Labour organisation in the province? And perhaps it is to do with what ‘Northern Ireland’ was meant to be in 1920? The SDLP was the architect of the present power- sharing system. The party’s weakness was its interpretation of the concept. Does power sharing mean sharing power voluntarily across the two communities or compulsorily across all elected parties? Initially it simply meant the inclusion of non-Unionists in government but the SDLP extended it to mean the inclusion of every major party. It advocated the d’Hondt system, a complex mathematical formula for awarding Cabinet seats for all elected parties. Is that power-sharing or an example of one for everybody in the audience? John Hume insisted on these provisions when there were some suggestions from his devolutionary colleagues that they did not need to be so robust. But it most probably boiled down to Hume’s calculation that a Sinn Fein presence was very necessary in the Executive to act as a check on Unionist desire for majority rule. Or perhaps he just did not entirely trust his colleagues in being an effective bulwark against Unionism on their own?” (IN 8.3.13).

That last paragraph really gets at the crux of the matter and what separated Hume from the party he led. Hume realised, it seems, that the SDLP was fundamentally a protest movement and did not have the skill of political manoeuvre that could transform it from a party of protest into a government.

Murphy then suggested how voluntary coalition and opposition would work in practice: leading to a minority party (the SDLP) representing Nationalism in most voluntary coalitions because this would be Unionism’s preferred option every time. Far from being a means of the SDLP becoming an Opposition, it would essentially be a way of the party getting back into government with the Unionists without Sinn Fein.

The SDLP and UUP criticised Sinn Fein and the DUP for operating an ‘Executive within an Executive’ and maintaining a hold on decision-making. The Good Friday Agreement had been constructed to produce weak government at Stormont by using the STV version of Proportional Representation for elections with six member constituents favouring the election of Independents and smaller parties. As in Germany after the Great War, this electoral system, which Britain would never touch itself, envisaged widespread dilution of power constraining the ‘extremes’ and empowering the ‘moderates’.

However, the tendency has been for the two leading parties from the two communities that get the First Minister and Deputy First Minister Offices to dominate. This is partly because the leading party in each community has an inbuilt majority within its designation (Nationalist or Unionist), and can therefore dominate voting within its communal bloc. It is then in its interest to form a good relationship with the dominant party in the other bloc to get policy through.

What has tended to happen is that, because elections in ‘Northern Ireland’ are really contests within each community, the DUP and SF began to support each other to maintain a stable and business-like relationship, to counter those who had been unable to accomplish this when the Executive was first established (the UUP and the SDLP), and who were reduced to whingeing after losing their majorities in their respective communal blocs.

That working relationship between the DUP and SF, ironically, is what made the Agreement functional and seemingly is what constitutes a menace to those who wished it to be otherwise.

Jim Gibney of Sinn Fein in his Irish News column has noted:

It might be said that a pre-requisite of a democracy is a Government and an Opposition. But ‘Northern Ireland’ is not a democracy and anything resembling democracy is what had to be got away from if a functional settlement was to be made at all.

The real reason why the SDLP could not constitute itself into an Opposition is what would happen then? The old Nationalist Party, of which the SDLP is in substance a continuation, agreed in 1966, under pressure from the Taoiseach, Sean Lemass, to accept the status of Loyal Opposition in the old Stormont. Lemass had not taken the trouble to analyse the ‘Northern Ireland state’ before exhorting the Nationalist Party to engage in the charade of Loyal Opposition in it, and the Nationalists did not have the character to refuse, even though they knew from long experience that Northern Ireland was not a state, that Stormont was not its democratic Parliament, and that Opposition was futile within the structures of the sub-government which had been farmed out to the all-class (and in a sense all-Party Party) alliance of the Protestant community. All that participation did was to bring out the futility of it and ripen conditions for the new departure of 1969.

When the SDLP was formed, and even before, the young Turks of Hume, Currie, Fitt and Devlin announced that they would succeed and transform ‘Northern Ireland’ by going into Opposition just like the people who they said were failures and who they were replacing. All that was needed was youth and vigour. But youth and vigour were not enough to overcome the system that had been designed to make it all so inconsequential.

Liberal democracy, as it is presently constituted in the western world, cannot work in ‘Northern Ireland’ because it cannot reduce the political arena to the business of a political Establishment and foster an apolitical mass in the society. The atomised individual is curtailed by the persistence of the community—and there are two of those. In Western states these days Liberal democracy has made political projects unattractive and unpopular unless they appeal to economic interests and the promotion of the market. This seems to be what is meant by Progress. Within such a project the State is reduced to the role of night-watchman, managing the population. However, in ‘Northern Ireland’ the populace keep reasserting itself against the politicians, and there is no State to conduct the business of real politics to rectify the inconvenient activism of the masses.

Liberal democracy and parliamentary politics aim at the curbing of popular power. But this has proved impossible in ‘Northern Ireland’ because it is cut off from the democratic State in which it is held. What exists in ‘Northern Ireland’ is perhaps closer to what constitutes true democracy— but it is dysfunctional for all that.

Stormont politics are ultimately futile and have been shown to be. The Stormont system is a closed system where the only really worthwhile thing is a break-out. And Britain has determined that a break-out is only really possible in one direction—although a veto has been placed on such a direction for the present. But Sinn Fein has been breaking out, whilst conducting a holding operation on behalf of its community in the North. And this seems to be at the root of attempts to undermine the peace that was so painfully constructed in the two decades between 1987 and 2007.

In March 2016 a Private Members’ Bill succeeded in making provision for a Her Majesty’s Opposition to be established at Stormont if any party so chose. John McCallister’s Assembly and Executive Reform Bill had proposed a complete restructuring of the Good Friday institutions to restore majority rule and collective cabinet responsibility on the Westminster model. It sought to abolish community designations and the Petitions of Concern safeguard. Sinn Fein and the SDLP blocked most of the proposed reforms but the SDLP, supported the clauses allowing for the establishment of an Official Opposition, while SF voted against. Thus the SDLP removed the Nationalist veto on this proposal (IN 2.3.16).

And now the new SDLP Leader will become part of an Opposition with the Ulster Unionists, to John Hume’s achievement.