“The Russians Shall Have Constantinople…” (A Postscript to the Durnovo Memorandum) 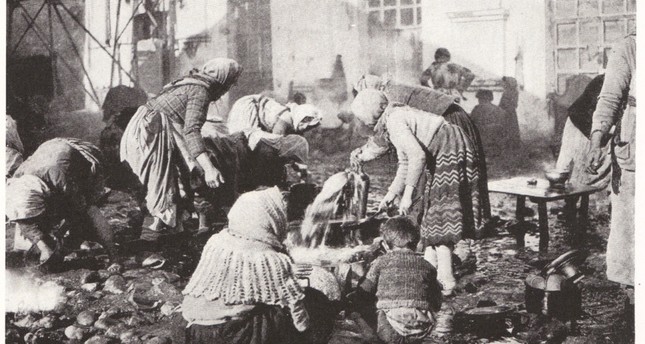 The great dream of the Tsars over the centuries had been to conquer and convert the Ottoman capital of Istanbul/Constantinople into Tsargrad and free the Straits for the Russian Black Sea fleet. In 1914 Tsar Nicholas II entered into alliance with the British Empire in order to fulfil that dream as a part of the Great War on Germany and the Ottoman Empire that he was expecting. Plans had been made by the Russian army and navy in preparation for the day, the Armenian Dashnaks had been primed and all that was needed was the right event in the Balkans to act as detonator.

It was for that reason that the Great War was brought to the Ottoman Empire in 1914.

The Tsar’s former Interior Minister, Pyotr Durnovo, had warned him in a last Memorandum (Where did it all go wrong for Russia?), in the February before the War, that even if he achieved this feat and was not cheated out of his prize by the British, the British Royal Navy, with its mighty fleet of ships, naval bases and coaling stations dotted across the Mediterranean, lay in wait for the Russian Navy beyond. It was not something that was worth risking all for in a catastrophic Great War that would destroy the peace of Europe and more.

But Tsar Nicholas did not listen to Durnovo and, 3 years later, as was predicted in the Memorandum, everything lay in ruins. The British had, indeed, granted the Tsar the city of his dreams, in the secret 1915 London agreement. But the catch of the Treaty was that he should fight to the death and never make a separate peace, no matter what, if he was to finally get it. Mindful of this the Tsar’s Steamroller had no brakes. It could only roll forward to Berlin or roll back, crushing Russia as it did.

The Tsar’s army collapsed due to the blood his people were forced to shed, in return for massive British loans, and being forced to fight on to the bitter end for Constantinople. After the Revolution of February 1917 he handed over power to the Liberals and Socialists who persevered with his War, and reaffirmed its aim of taking the Ottoman capital, but who proved incapable of governing the State. And the Bolsheviks who then emerged in catastrophe, under Lenin’s direction, both governed the State and saved it, as well as wiping the Romanovs from history, along with their catastrophic War. Far from the Russian eagle flying over Tsargrad, the Ottoman army had reached Baku, in the Russian Southern Caucasus, captured its oil wells, and made it the capital of the new state of Azerbaijan.

But the Russians did actually reach Constantinople in the end…

In November 1920, the remnant of the White Russian society, who had attempted to overthrow the Bolshevik upstarts and restore something of the Old Russia, were obliged by the Red Army to evacuate the Crimea with General Wrangel’s forces, after Britain withdrew its support for the attempt to overthrow the Bolsheviks. They found themselves sailing for the Tsar’s prize, now occupied by their victorious British allies, for refuge as asylum seekers.

Over 120 boats, containing around 150,000 Russian refugees, arrived in Constantinople/Istanbul. With them the Russians brought the remnants of their society, including the precious Imperial stud. They came not, as they had once hoped, “to hang Russia’s shield on the gates of Tsargrad”  but as seekers of shelter and protection. The hungry and thirsty were known to lower their wedding rings and other jewellery down on string to gathering boatloads of Armenian and Greek shopkeepers in return for bread and water. Their Christian allies treated them with contempt and, in their hour of need, bled them dry.

The Russian Army and refugees slept in the stables of Dolmabahce Palace, in rooms vacated by prostitutes in the cheap hotels, in the streets, and in makeshift army camps outside the city. Young Tsarist officers worked as porters and butlers on the streets of Pera and slept in bunkbeds in the camp at night. They walked the Grand Rue de Pera in their Cossack uniforms, and worked as taxi drivers, or played the violin in casinos. The concierge of a hotel could be a General while a waitress at a restaurant could be a Countess. They gave to Istanbul the European-style restaurant and generated a new night life. But many just descended into ruin in the city.

The Ottoman government, which operated before it was repressed by the British occupation forces, did not spare the aid to the old enemy they could provide under very difficult circumstances. Russian lawyer and Duma member Nikolay Chebyshev wrote in his memoires, “The immigrant Russians have not felt as much in their homes as in Istanbul, even in the embracing Slavic countries.” A refugee later said, “While fleeing from Russia, we always thought that the only country that opened its doors to Jews who escaped from the Spanish Inquisition was Turkey in 1492. They would not turn us away.” (Daily Sabah, 7.7.2017)

Good relations were formed with the hospitable Moslem Turks, their enemies of centuries, whilst the Russians grew to despise the greed and dishonesty of those Christians they had once proclaimed as allies to liberate. The world had been turned upside down.

Graham Stephen, a Scotsman who had travelled as a vagabond through the Caucasus in the decade before the Great War, and who had written of the contentment he observed in the Russian countryside during the days of the great Count Witte, found himself in Istanbul in 1920-1. There he came across the broken remnants of Old Russia, which, having been promised Constantinople by Britain in return for its services in the Great War, had finally reached its heart’s desire – but not as conquering heroes establishing Tsargrad, but as abandoned refugees from the failed British interventions in Russia that the duplicitous Lloyd George had aborted.

In British-occupied Istanbul, Graham Stephen commented: “The Russians shall have Constantinople”, after all.

Everyone in England would have known what that phrase meant. It came from one of the most famous London music hall songs of the late 1870s, which made a fortune for its Irish performer – “The Jingo War Song”. It had stirred English fight against the Russian Bear and his attempt to take Constantinople in 1877/8, which Disraeli had thwarted with the threat of war and taken care of in the Treaty of Berlin. Its famous chorus, which popularised the term “Jingoism” went as follows:

The Russians shall not have Constantinople.”

That song lived in the memory for at least a generation in England and Ireland.

But that was in the days before Sir Edward Grey brought about a Revolution in British Foreign Policy and ditched Britain’s traditional allies in Istanbul to procure the services of England’s main enemy in the World, Russia, so that the Tsar’s Steamroller could be used to help destroy the German commercial threat in a Great War. The Great Game gave way to the Balance of Power and the Great War.

Graham Stephen saw the result of the British success in luring the Tsar into an unnecessary war on the streets of Istanbul in 1920:

“Constantinople has five times as many people as it can house, a city now of appalling unhappiness and misery, and of a concomitant luxury and waste. A scene at night: two children, a boy and a girl, lie huddled together on the pavement sleeping whilst the rain beats down upon them. The crowd keeps passing, keeps passing, and some step over them, many glance questioningly downward, but all pass on. No one stops. I stood at a corner and watched. Then I walked up to the children and wakened them and tried to make them speak. But they stared with their pale faces and said nothing… I stopped a Russian woman who was hesitating as she passed. “There are many,” said she. “It is quite common. You see plenty babies lying in the rain…”

The Russians have got Constantinople at last. It Is an irony of Fate. There are a hundred thousand of them there, the best blood of Russia, and the most charming and delightful people in Europe in themselves, though now almost entirely destitute of means… The refugee peasantry and working class are mostly confined in barbed-wire internment camps outside the city, and guarded by Sengalese. Twenty per cent get permission to go into the city each day. The seventy or eighty thousand indigent Russians in Constantinople belong mostly to the upper classes. Very many belong to Petrograd society, and are people who fled to the Crimea and the Caucasus, were caught up in the Deniken or Wrangel panic, and transported hither. They are well-educated people, speaking English and French, and well-read and accomplished. But how little are those modem accomplishments when it comes to the elemental realities of life…

Alas, the temptations are great. Need becomes more and more incessant. Starvation stares thousands in the face. One sees those who keep their heads up still, but we lose sight of many who are utterly cast down and lost. Many a Russian has gone down here in this great city and been lost, vanished into the hideous underworld of the Levant. They sell all their jewels and then sell the last jewel of all. In the cabarets and night-halls of low amusement there is nude dancing and drink, lascivious Greeks, drunken American sailors capable of enormities of behaviour, British Tommies with the rolling eye, “seeing the world and being paid for it” as the posters say. The public places are a scandal, and the private dens got up in all sorts of styles with rose-coloured shaded lights and divans and cushions for abandonment to drugs and sensual affections must be explored individually to be described. A part of old Russia has come to Constantinople — to die.

In charge of this imbroglio is a British General. The city Is under Allied control, and is patrolled by the troops of four nations, but the British is the main authority. G.H.Q. Constantinople occupies a large barracks which faces a parade-ground. Indian sentries march to and fro outside and enjoy thus serving their King, a picture of polish and smartness.

Facing the barracks is a smaller building called “The Jockey Club” where the Commander-in-Chief himself and many of his staff meet to lunch or dine, play billiards, or chat pleasantly over their liqueurs in English style.

“What a pleasure it is to see our fellows in the streets so clean and well-behaved, with no interest except in football, and to compare them with the loafers you see everywhere,” says General M. “One thing the British Empire can thank the Jews for,” says Capt. C, “is that they’ve ruined Russia.” “What’s the matter with the Russians,” says stout Col. C, “is that there’s no punch in them; they’re a helpless sort of people, from a general to a private soldier, it’s all the same; they cannot cross a road unless you take them by the hand and lead them across.” (Europe – Whither Bound?: Quo Vadis Europa?; Being letters of travel from the capitals of Europe in the year 1921, pp.35-40.)

It is hard to read this and not weep. And people wonder why Russia is still suspicious of Britain!